So it seems that people will do some crazy things to get featured here. Not sure why - it's not like I'm battling Google, Youtube and www.clownpenis.fart for the bulk of the web's hits, but I guess it does bring a bit of notoriety. Someone went to the extreme and and broke his guitar so I could fix it and post it's sordid tale on the blog. The suspect in this beating is my very good friend Nate, who does have a bit of a violent streak. The guitar came into the 73 Guitars ER on Nov.23 showing signs of being in an abusive relationship. 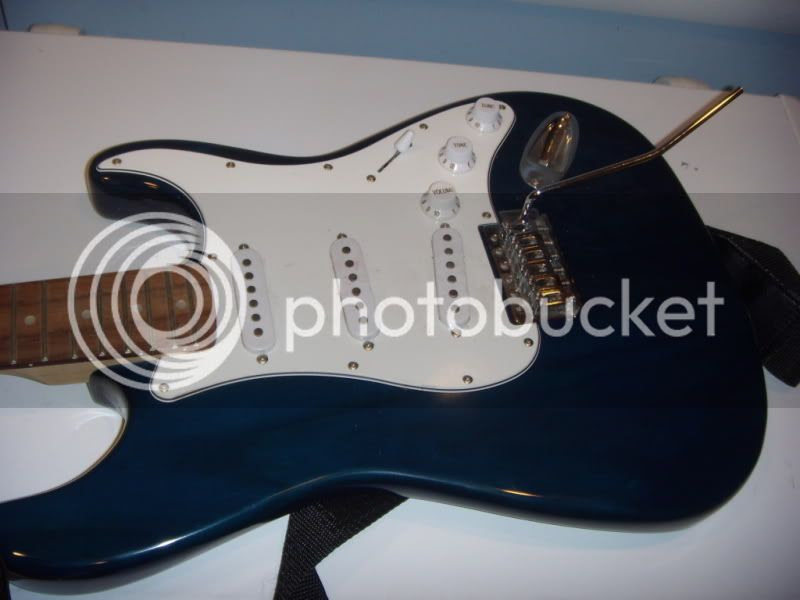 Diagnosis: Somehow, Nate managed to screw the trem arm into the block so tightly that it never came out. He then tried to wrench the arm hard the other way in a failed effort to remove it that the block actually split in half. Now, that's Ok. Shit happens with guitars, and these low-end Chinese axes are probably made from wadded-up cheesecloth and old fence wire so I'm not surprised something broke. However what followed can only be described as the most ghetto-ass fix I've ever seen on an instrument, and I've seen some real winners in my day. 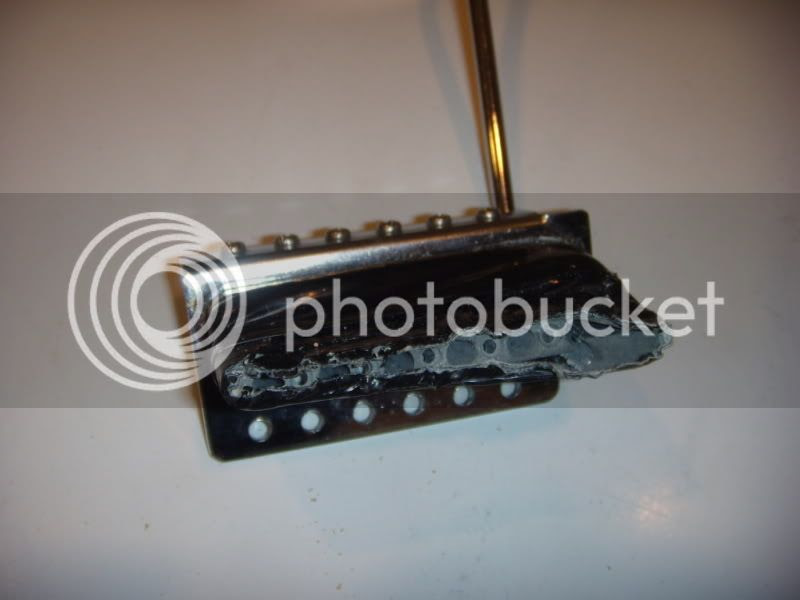 So once I composed myself and changed my underwear after letting out a gleeful pee squirt from laughing so hard, I peeled off the tape to get a better look. The tremolo arm had become one with the block, and the block had to die to separate the two. Kinda romantic if you think about it for a minute. Go ahead - think. I'll give you a minute. 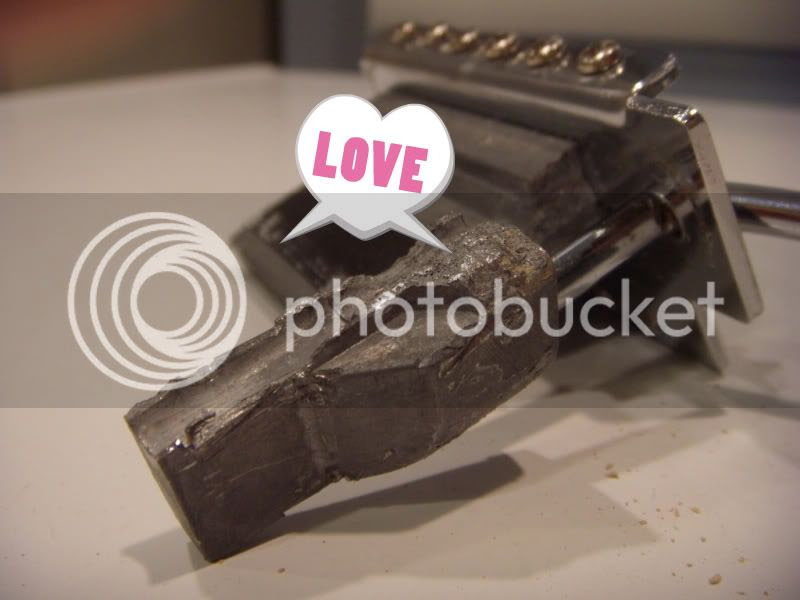 Ok, enough Romancing the Trem. While it's perfectly acceptable to rag on ol' Nathan for taping up a split trem block and trying to play it, I must give him credit and show respect where it's due. Nate heard the roar of the rock-and-roll animal deep within him, and it was just too much to contain. Broken guitar? F that. He's gonna fix it any way he can, crank it up to 11 and feed that animal. It almost brings a tear to my eye.

Repsect for Nate's appetite for destruction aside, we still have an unplayable guitar spitting up plywood wood chunks all over the 73 Guitars emergency room. This guitar is NOT about to rock and as such cannot be saluted. We need a bridge, STAT. So Jay and the good folks at Guitarfetish.com come through for me with a replacement bridge kit. Vintage style bent steel saddles, post holes spaced for import low-end Strattycaster knockoffs, can't beat it for $30. Not sure how toneful it is, but when the guitar is made out of old Chinese newspapers and ground-up coffee cans, it doesn't matter. 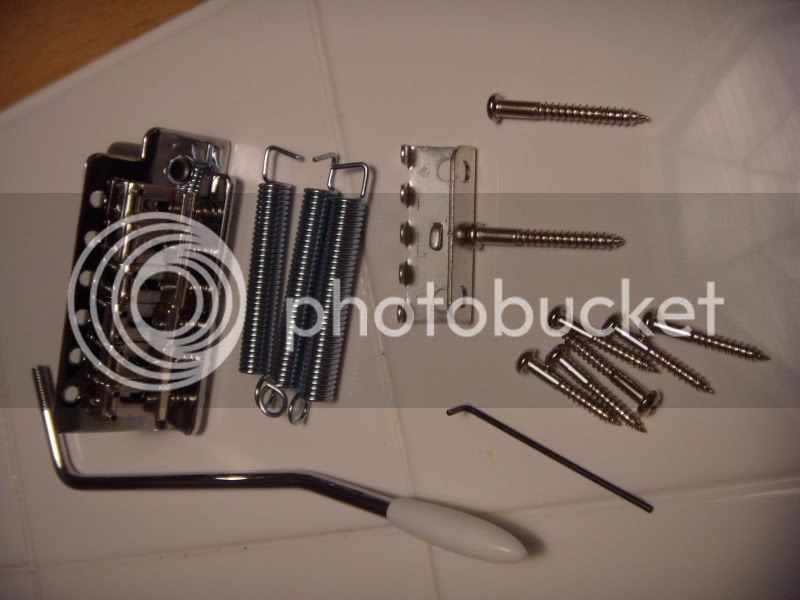 The bridge lined up perfectly, but something sinister lurked underneath the attractive blue finish on this guitar: the wood. Check this out: 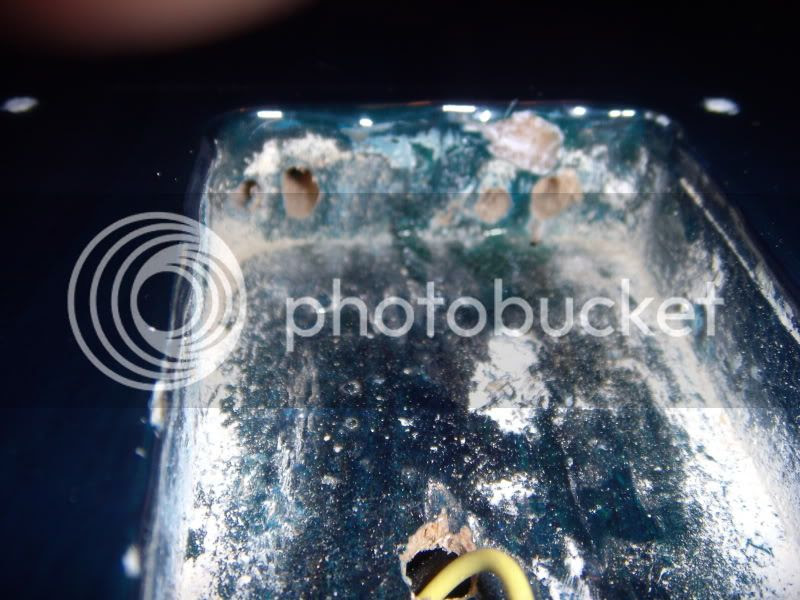 The bridge claw has been mounted on two new holes, just next to the stripped-out original holes. Yikes. As I suspected, the crap wood that made up the bulk of this guitar's material wasn't so welcoming to the mounting screws after being removed once or twice previously. The wood was crumbly and soft and then I realized this job was going to be like installing a tremolo on a birthday cake.

Somehow the 6 screws on top held OK, One or two didn't really grab any wood, but it held. Underneath I re-used the second holes to mount the claw. It took some finesse but the screws held. Maybe the birthday cake was a bit stale by now. 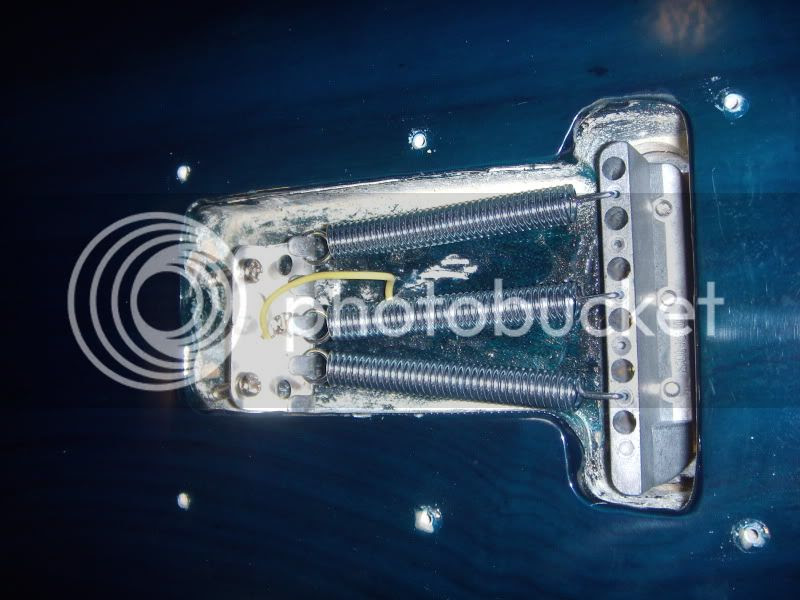 So now we have the bridge installed and I'm ready to bolt everything back up, string it, set the intonation and give it back to Nate the Rock and Roll Animal. It's against my personal convictions to return a guitar to someone without fixing painfully obvious playability issues. The neck angle on this thing was so far out-of-whack it looked like a crippled dog's hind leg. Like one of those dogs that has the plastic funnel around their necks and use those little doggie wheelchairs that they drag themselves around on? You know, like when you see that you wonder why the owner doesn't put the poor thing out of it's misery but maybe it's all that person has. Maybe their husband died and it was his dog and they can't part with little Barky Poo so they just spend everything they have to keep the pathetic thing alive when it's living a miserable existence to just represent a happier time in the owner's life and the poor mutt has to pay for it's owner's guilt and sadness by living one more horrible day trapped in that broken little doggie body.

Wait - where was I...oh yeah. The guitar. Here's where the great internal struggle about whether or not to fix the neck started.

Do I just give it back like this, knowing it could be better? Nate's my friend and if he's trying to learn guitar, it would be nice if it played a little better. Nobody else is gonna fix it for free. Or, do I take a chance on unscrewing the neck and stripping out the holes in the neck? It looks like solid maple, but even a mozzarella stick looks solid until you rip into it and the innards just drip out. Maybe the neck has the same empty-pizza-box consistency that the body does. If I can't get the neck back on, Nate's rock-and-roll animal will kill me and scatter my bones. What to do...

Of course I unbolted the neck and started shimming it. It already had a thin piece of sandpaper in the neck pocket, so I'm not the first person to recognize it was beyond bad. I kept throwing cardboard in the neck pocket, testing it and shaking my head in disbelief as I cut another shim out of a shoebox I had laying around. Eventually, this neck angle required a pile of cardboard roughly as thick as one of those Hershey's Miniatures to get it lined up.

So here we are: new bridge, shimmed neck, new lease on life. Discharged from the 73 Guitars ER on December 6. 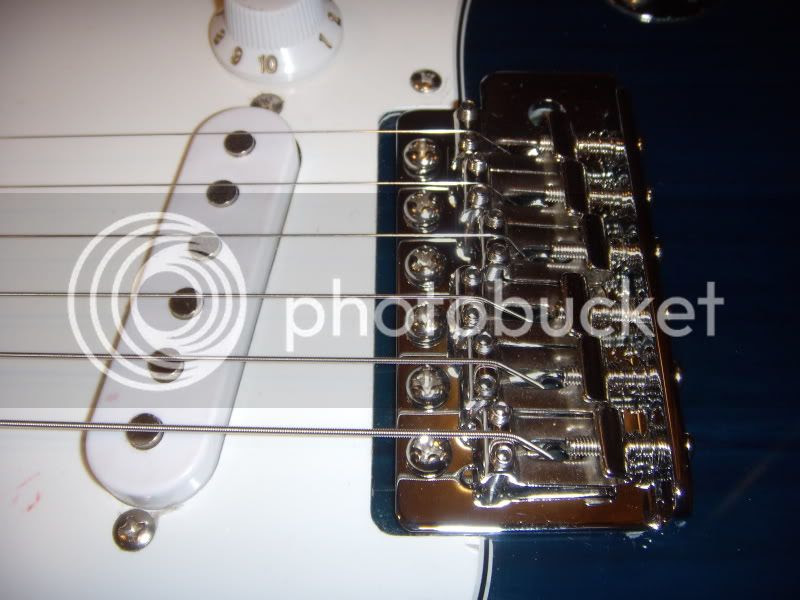 To be honest it's actually a nice guitar. I had fun bashing it a little bit but thanks to the hockey-puck sized shim in the neck and some new strings it plays pretty well and even sounds almost good for a $100 guitar. And don't think I let the delicious irony in this guitar's brand name go unnoticed. That's funny right there, i don't care who ya are. Nate really "crafted" the bridge on this one. 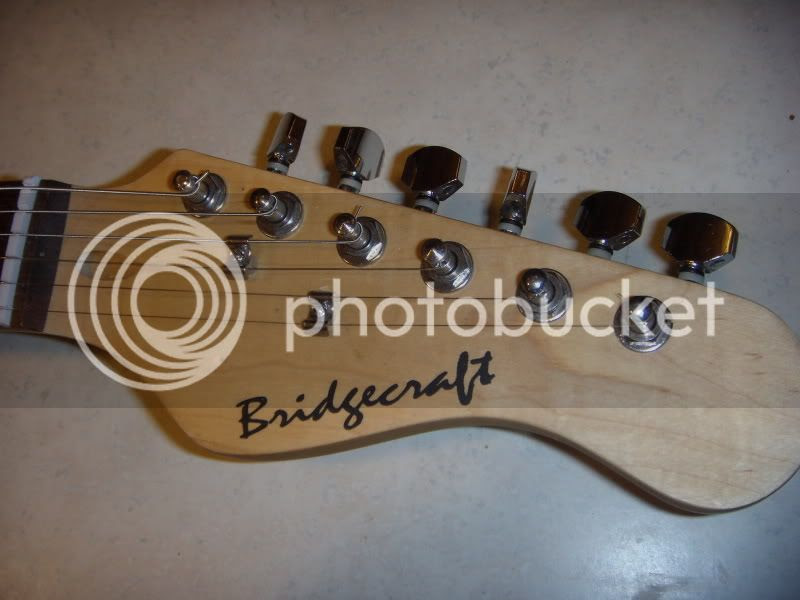