Although I've never been a fan of the fuzz effect personally, I'm building an Octavia clone with a feedback control. It's mostly a BYOC Octave Fuzz kit that I'm rehousing and modding a bit. More details later, but here are some preliminary build pics: 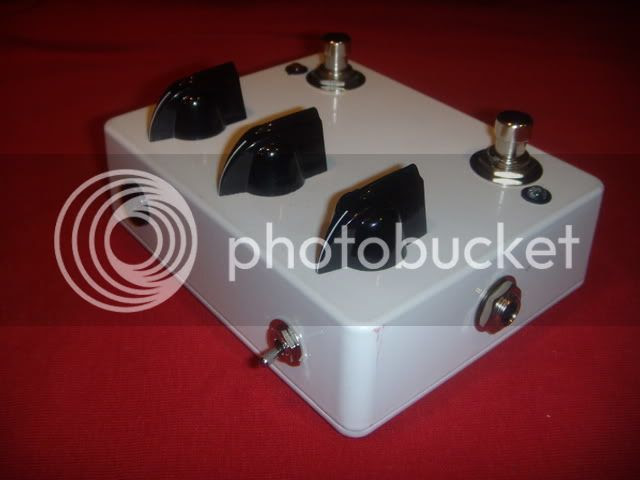 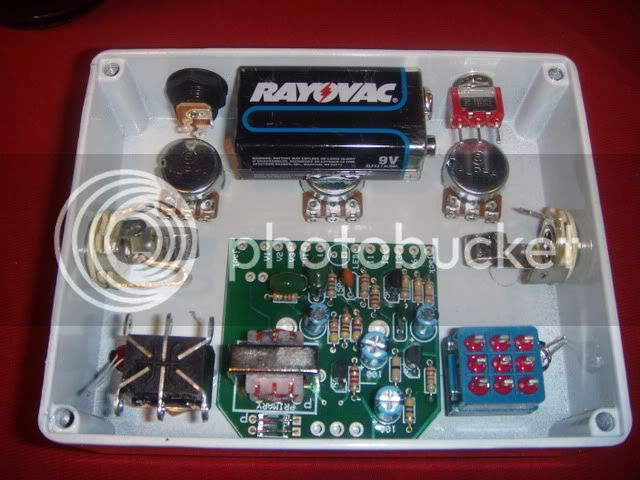 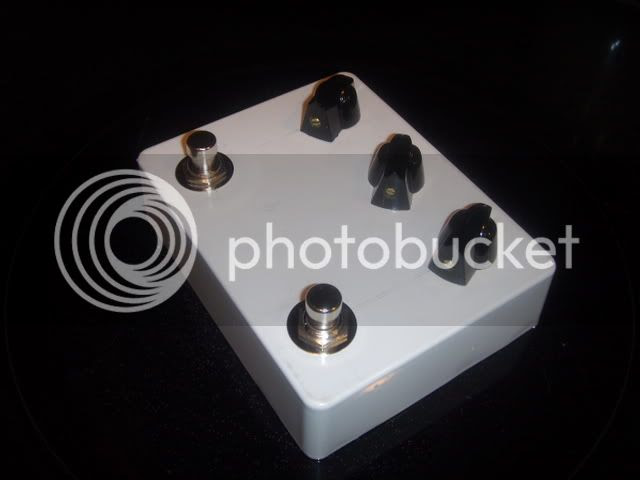 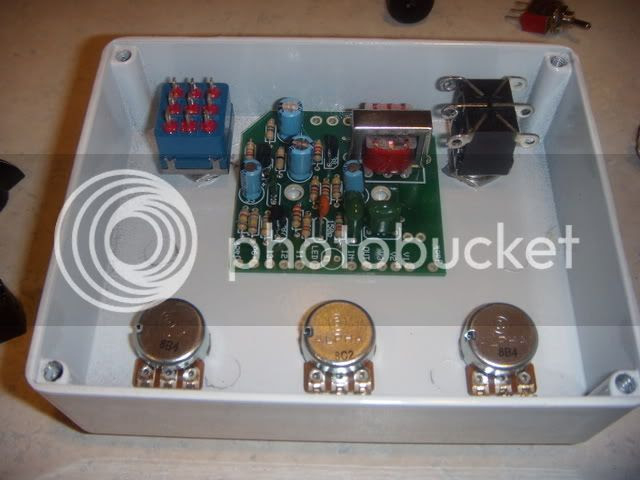 Although I've been working on a lot of pedal projects lately, I have been working on some project guitars as well. Now that the summer is over and the humidity has dropped, I can spray again. Mostly been working on the Timmy GT, which is almost ready for the racing stripes. Tim and Danny were out back spraying the metallic silver color coat with me over the weekend! Tim did fine but Danny had a hard time pressing down the spray valve, so he had me do it and he moved the can. Somehow we avoided getting paint runs. Not sure if that's due to the Duplicolor being easy to work with or the inherited painting skill of my boys. Hopefully we can soon finish this project that was started almost 2 years ago. 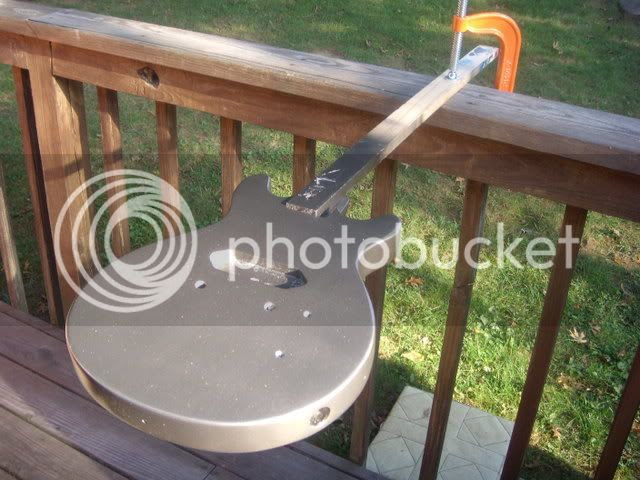 I've decided that Project Shredder is being scrapped. The neck I bought never fit the body correctly, and even though I modified the neck heel it still won't work right. The post holes for the Floyd Rose were drilled incorrectly from the factory, and my attempts to fill and re-drill were sloppy and imprecise. I really need a drill press for this kind of thing. I'll be using the body fpr paint practice and may use the neck for re-fret practice. Oh fun... The shame is that I have all the hardware needed to finish it - pickups, Mighy-Mite Floyd Rose, knobs, switches, etc. may ebay them or try another Shredder project later on.
Posted by Bryan at 9:29 AM No comments: 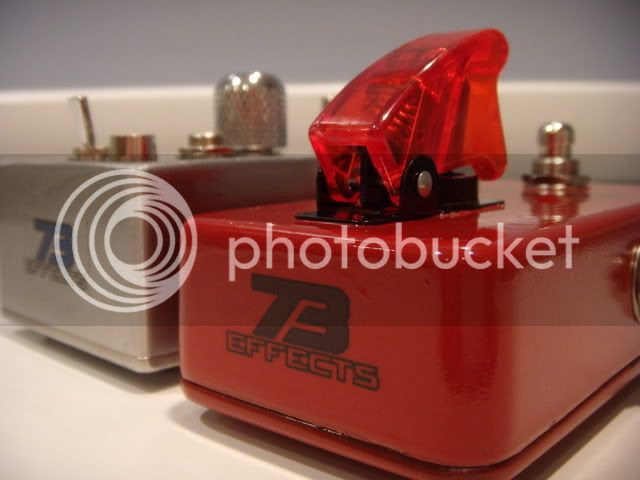 Today I shipped out two pedals for Mike in Brooklyn. To add to his bass/spaceship noise "Sonic Fiction" rig he'll soon receive the "Cut Off" momentary switch/nuclear missile launcher and the "Infinity" feedback/bypass looper. Here they are:

Built to Mike's inexact specs and not really designed right, it enables Mike to play a recorded passage or some crazy noise he created into his looper and toggle it on/off like a piano key, creating a stutter effect. It has some weird signal bleed issues but I think I have a suitable workaround. We'll see if Mike thiinks it's suitable. We could be scrapping this and going a very different direction, we'll wait and see how it works for it's new owner. 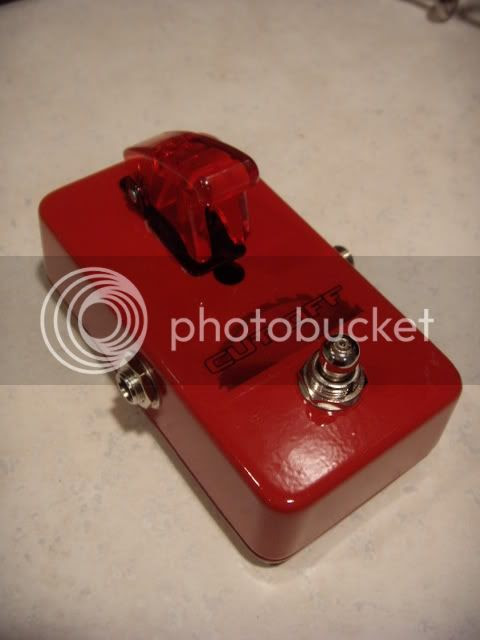 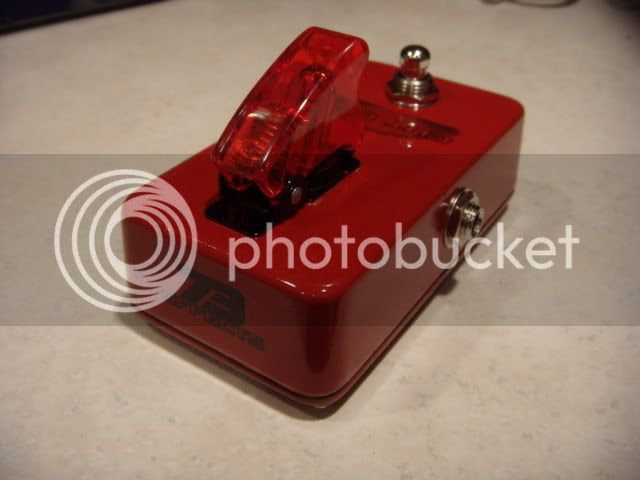 A pretty standard feedback/bypass looper. I suggested one of these to Mike and he was like "Hell YES! So I built it. It's a bit more practical in that it has a low-value (B100k) pot for the feedback control. It doesn't give you the most crazy feedback, but it allows the user to have greater control over the lower range of available feedback. Instaed of just making a hellacious racket it camn be used as a more subtle textural effect. Of course it all depends on what you use it with. Therein lies the fun.

It sent my old DOD Octaplus off the edge into wild oscillating what-the-furk-is-that-hell-noise, but also let me smooth things out and get some cool ring modulation effects. I was able to create an unholy shriek with my Hiwatt wah, and the pitch would change as you rocked the pedal. With a bit of practice I was able to play the riff from 'Iron man" by just moving the pedal. It didn't self-oscillate my Phase 90, but thickened it into a rich, chewy phase. Also, I mounted the send/return jacks on top to save some pedalboard space. That way you can still fit this thing next to other pedals without the extra jacks getting in the way. That's an exclusive 73 Effects design...:) 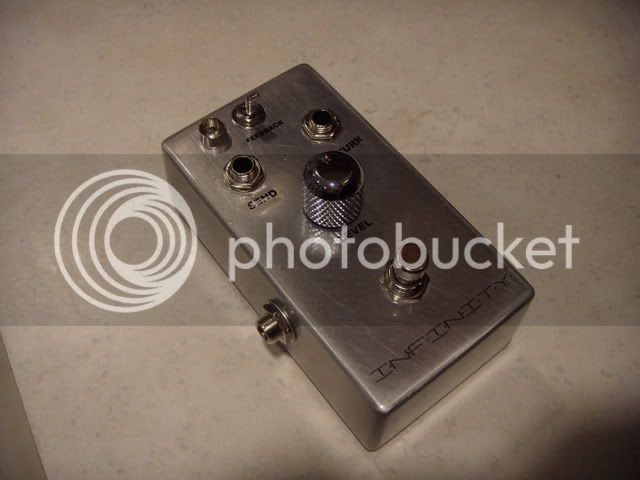 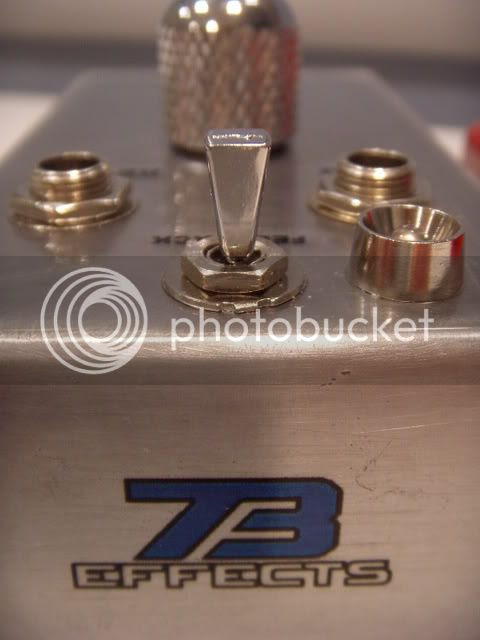 Short bio on Mike (hope he doesn't mind). Mike and I go way back. 1993 to be precise. As a nerdy orientation counselor at Cabrini I (along with my future wife) went to the train station to pick up a prospective student who never showed up. But here were these two guys with funny Noo Yawk accents, overnight bags and confused looks on their faces. Mike and his little brother Dan decided to hop a train in Long Island and show up at Cabrini for orientation with no arranged transport back to the college. So we piled them and their gear into my Mustang and off we went to campus. Quickly learned that Mike was a musician and Dan was an athlete. Since I'm about as athletic as Helen Keller, Mike and I got along immediately, formed a band, experimented with strange and fabulous beers, created havoc and mayhem around the campus and kinda became like brothers. I even made him wear a tuxedo and forced him to clean himself up for my wedding.

Anyway, Mike now lives back in Noo Yawk and does this crazy live show with his 6-string fretless bass, tons of effects and a Loop Station. we'll be collaborating on some future additions to his live rig. Mike has been a great friend, a willing partner in crime, a world-class drinking buddy and a great musical influence to me for years. Now he's graciously agreed to be my lab rat.

Check him out here:
http://www.myspace.com/ngmike
Posted by Bryan at 1:54 PM No comments: