Ok. It's a little too humid to spray guitars, and haven't really had the time anyway. I've been kicking around the idea of making my own pedals for years and finally took the plunge. I ordered the BYOC (Build Your Own Clone) 250+ kit, which is supposed to be a clone of the old-skool DOD 250 Overdrive Preamp with the option to modify it to the specs for the similarly-old-skool MXR Distortion+ pedal. The circuits are nearly identical except for a few resistor values. I really wanted to try a good overdrive with my new/old Laney amp, so why not build one.

One of many cool things about BYOC is when first-time customers order a kit, they throw in a very simple project called the "Confidence Boost". It's a very easy low-parts-count build for a linear boost circuit. It's a legit, useable effect but the kit that they give you isn't complete - no enclosure, on-off switch or knobs. It's designed to get you familiar with the various components and more importantly, how to solder them to a printed circuit board and make the thing actually work. Easier said than done. The idea is to build the confidence boost first and if you decide that you hate soldering tiny components and can't deal with the teeth-clenching frustration when something inevitably goes awry, you send back the pedal kit you bought for a refund. It's a no-brainer.

So that brings us to the Confidence Booster. Here's where we start: A soldering station with magnifier and "helping hands", the kit components, and an essential and often overlooked part of any guitar project: a good IPA. 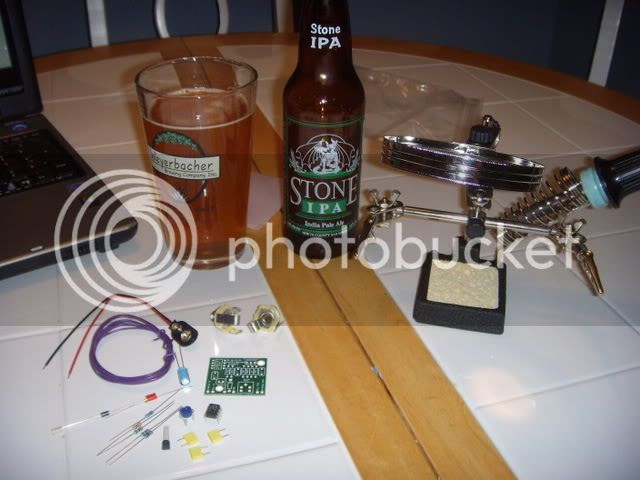 Going off of the excellent step-by-step directions on BYOC's site, I organized the parts on a piece of paper. What I was not prepared for was the tiny size of these components. They looked much bigger in the pics on the site, but when you're holding a 2x2" circuit board and see about 60 tiny solder pads, it was my first "oh crap" moment. 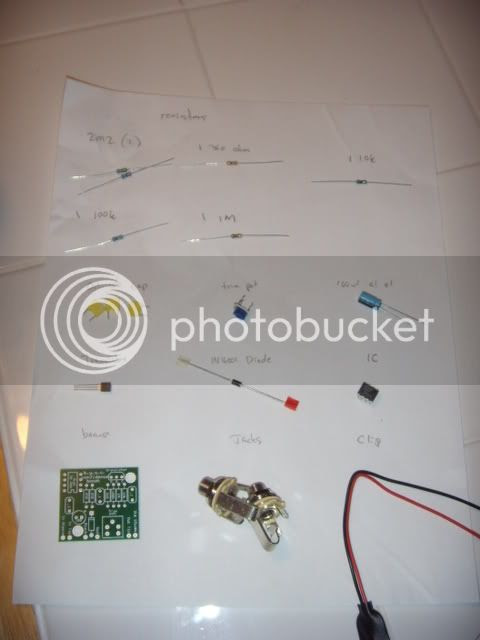 The magnifier proved to be extremely helpful, so I started soldering. Here's the first three resistors: 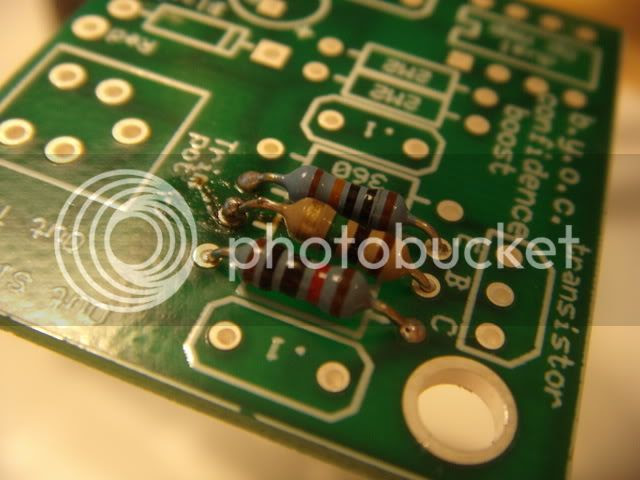 I got a lot of solder drip-through to the component side of the board, but eventually got the hang of it. I never have soldered parts this small before and never on a PCB. For the second (middle) resistor I'd heat the joint on the back and apply solder and the solder would just disappear. So I added more, Same thing. Finally after doing this about 4 times I flipped the board over to see the resistor hanging almost vertically off the board with a huge blob of solder connecting it to the board. I laughed out loud - It looked like it would have worked fine, but I desoldered and started over, Screw-up #1 but not a show-stopper.

here's the board with all resistors, the diode and the IC. You can see some big blobs of solder poking through to the component side on the IC, but still making good contact as far as I can tell. 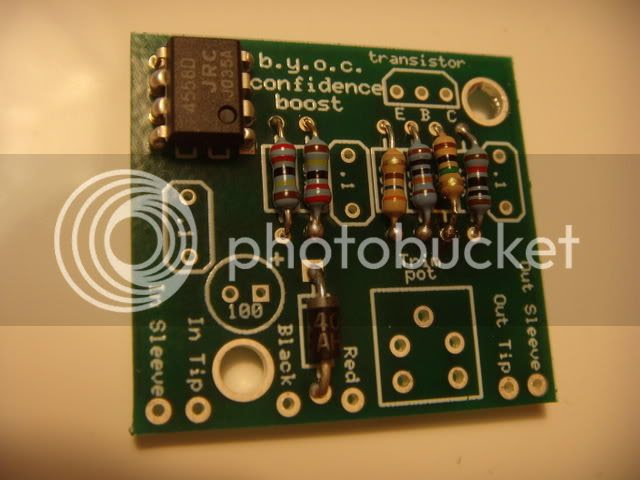 Now we have the completed board, including the trim pot, capacitors, and transistor, 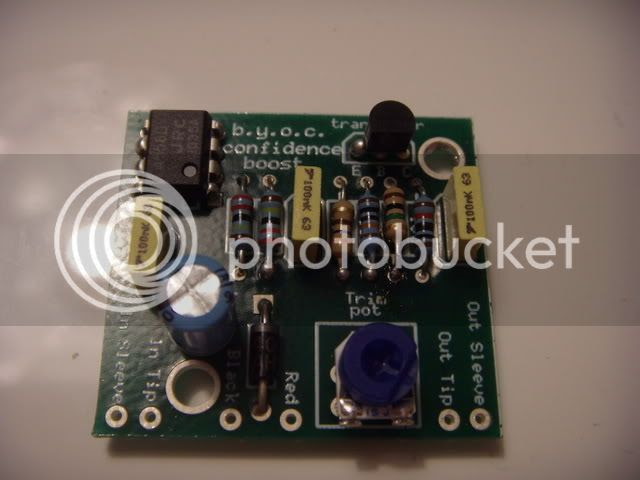 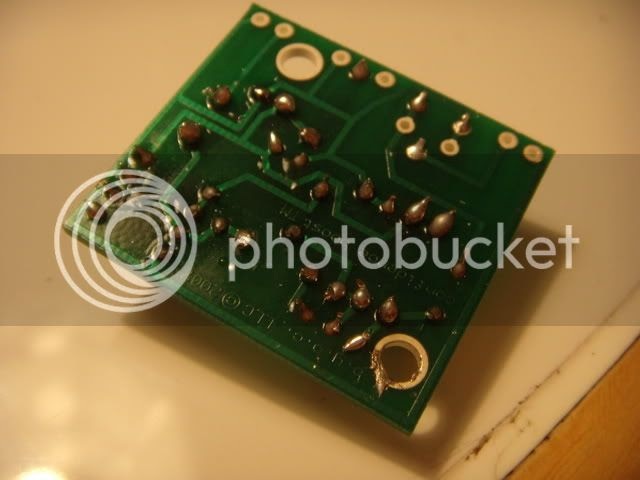 The jack and battery clip wires 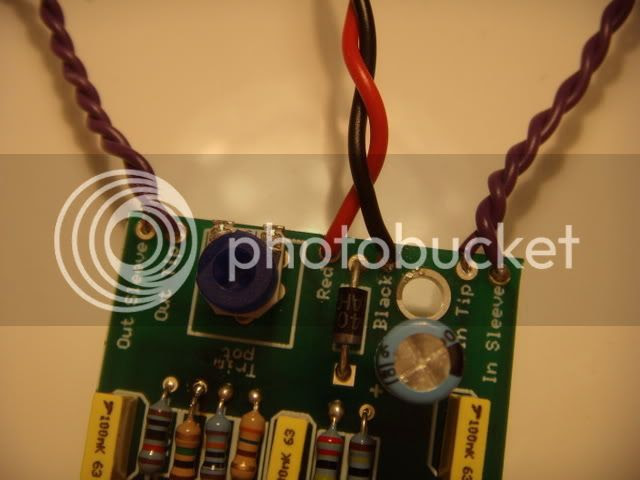 And here she is: 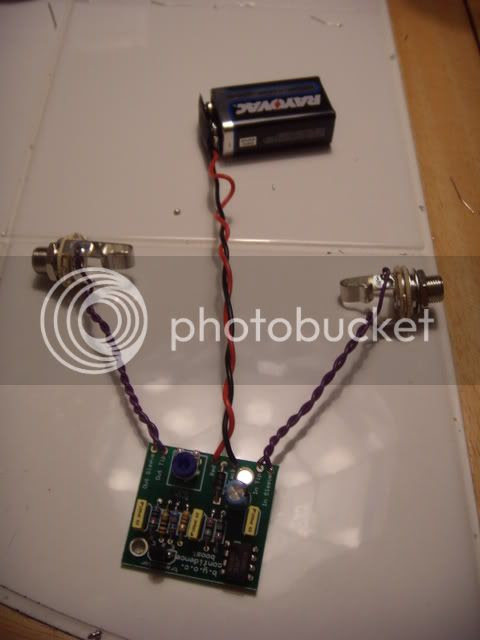 Now, to plug it into my kid's itsy bitsy Marshall practice amp at 2:30AM 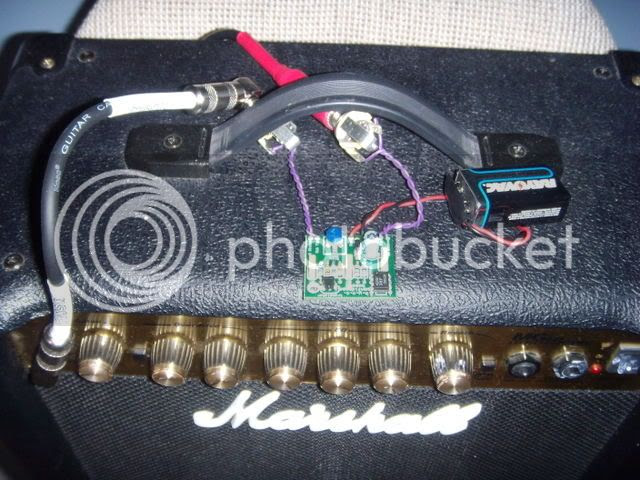 It works!!!!!!! It more or less acted as a volume control for the baby Marshall, but when I plugged it into my Laney 50-watter it definitely boosted the signal and gave it a bit more gain, albeit compressed and a bit smushy on the bottom end. Sounded great with my Hiwatt wah.

So that's what the thing does, and what it looks like as it's going together, The soldering wasn't top-notch but for a first build, I'm satisfied. It took about 2 hours from start to finish, only had to break out the desoldering wick a few times to fix some boo-boos, but it worked perfectly the first time I plugged it in. Consider my confidence boosted. On to the 250+...
Posted by Bryan at 11:53 AM No comments:

Here's a 7-minute sloppy mess of an amp demo I made with my new/old Laney AOR Pro-Tube 5012 combo. Aside from the obvious Zep, Joe Walsh and Def Leppard riffs, this was all stuff I just made up on the spot while recording it. Just mostly messing around. I tried to cover the clean, mid-gain and high-gain tones.

I used my 1995 Fender American Standard Strat with stock neck and middle pickups and Seymour Duncan Lil' '59 in the bridge. Also my 1991 Explorer with a Seymour Duncan Screamin' Demon in the bridge and Tone-Pros AVR-II bridge/tail[piece combo. (Thanks Wookie!) I had an Aphex Guitar Exciter in the effects loop, it was on the whole time.

This Laney was made in 1985, looks like a floor safe, runs on 2 EL34 power tubes, 4 12AX7 preamp tubes, has onboard reverb, effects loop, switchable speaker impedance. The preamp has 2 modes, normal and AOR, but one shared EQ with pull-boost on bass/mid/treble. 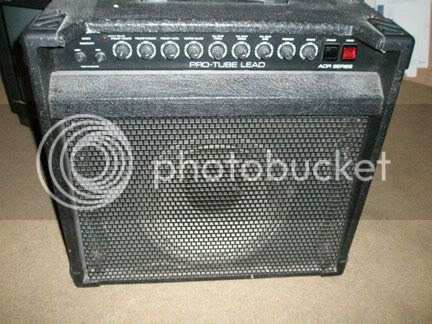 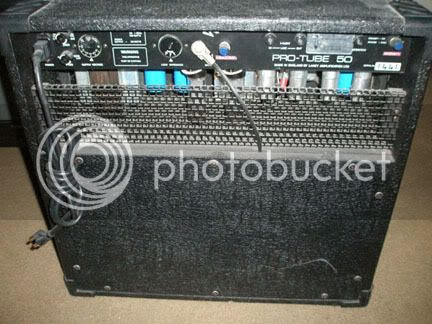 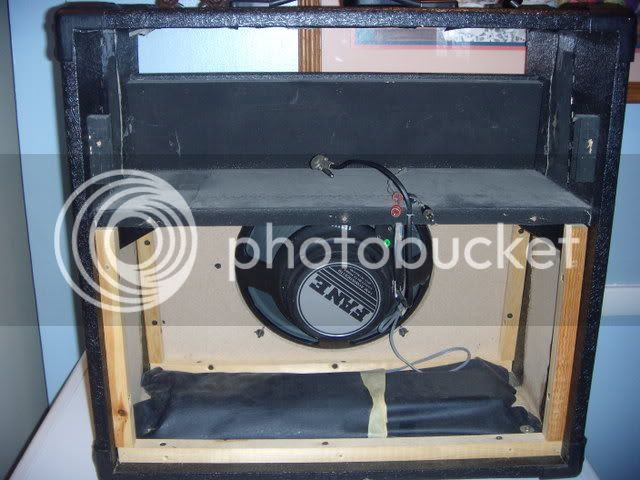 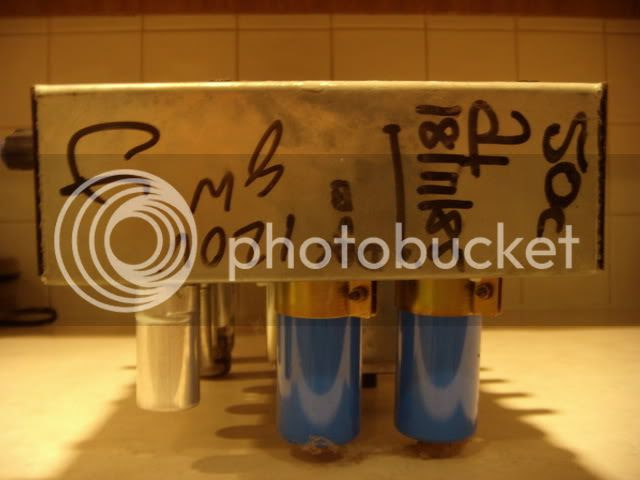 Look at the size of the transformers. 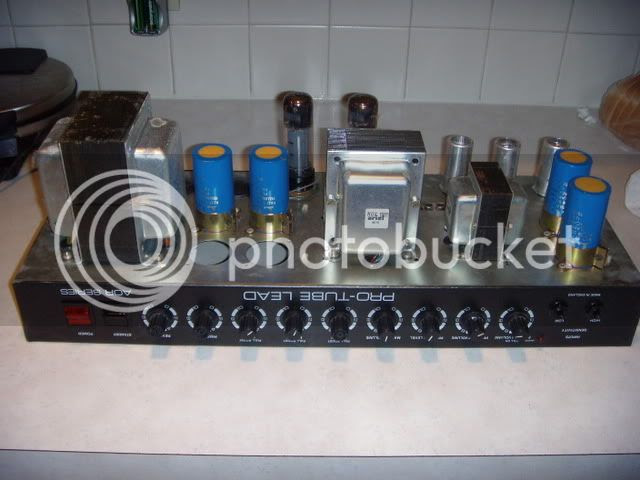 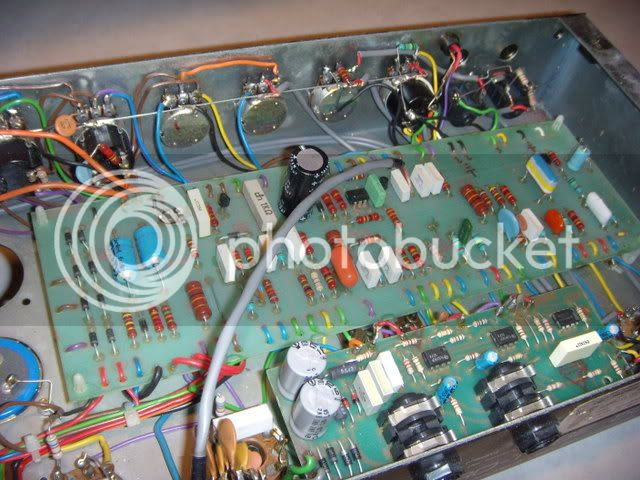