Back in 1984 an impressionable 6th grader out shopping with his mom asked for some cash to buy this vinyl album called 'Masters of Metal". 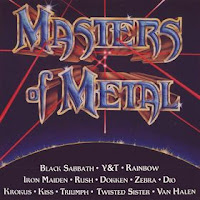 It was a K-Tel compilation with artists like Dio, Twisted Sister, Rush, Dokken, Y&T, and Iron Maiden. This kid had just started discovering the so-called "heavy metal" bands back then. Anything with loud, distorted guitars and screaming vocals was all he needed. Though Masters of Metal provided lots of heavy guitar riffage and vocal histrionics, one song on this album hit him like a sack of hammers: Iron Maiden's Run to the Hills. This kid then learned the delicate art of needle-dropping so he could play that song over and over and over again. Didn't have that handy "repeat" button like we do now. You had to pick up the phonograph needle, find the groove between the songs and drop it onto the spinning platter. It was tricky but well worth the effort. That way you could avoid very non-metal songs on that record like "Tom Sawyer" and "Dancing in the Streets". Seriously - when was Rush ever considered metal? And of all VH songs they picked that one on purpose. Maybe since it was a cover song it came cheaper. Who knows. Anyway...

Aside from the blazing dual lead guitar of Adrian Smith and Dave Murray and the air-raid-siren vocals of a young Bruce Dickinson, what separated Run to the Hills from the rest of the dreck on that album was the rhythm section. (not implying Rush's rhythm section is "dreck") Steve Harris and Clive Burr sounded like a thundering herd of pissed-off elephants, but mostly it was Harris' percussive galloping bass line made that song move. Lots of kids wanted to play lead guitar after hearing songs like this, but when a bass player can drive a band like Harris can, some kids want to take a different path. A path with fewer but heavier strings.

In case you've never heard it, here it is. Turn it up.

So later on, that same kid picked up Iron Maiden's latest album "Powerslave" and pretty much wore that tape out. There was no turning back. So when that inevitable moment happened when a young metal fan wants to learn to play guitar, he decided to learn bass, a decision directly influenced by Steve Harris and Iron Maiden. Now, almost 25 years later, that same kid is planning a Precision Bass project as a tribute to his first real musical influence. 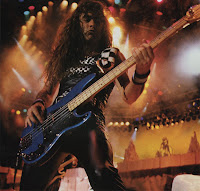 Ok,so now that we have the dramatic back story out of the way, here's the plan: Build a P-bass replica of Harris' main instrument during the 80's, and name it after my favorite and most influential Maiden album from that era. Harris almost exclusively played a 1971 Fender Precision Bass with a maple neck, sparkly blue body, Badass II bridge, mirrored pickguard, and a Seymour-Duncan Quarter-Pound pickup. Very distinctive yet still a pretty standard Precision Bass. I'm not going into great detail to replicate every nick, every scrape, every part down to the exact excruciating detail, but will assemble a P-Bass that's heavily influenced by his and will be unmistakeable as a Steve Harris bass to anyone who claimed to be a fan of metal in the 80's.

Wookie, my brother from another mother, donated the majority of the parts for this project. I can't thank him enough. I got a beautiful Ash P-bass body, maple neck, chrome tuners, chrome dome knobs, and a bridge. I have a Leo Quan Badass II bridge on order, should be here soon. Anyway, I'm starting with this pile of parts so far: 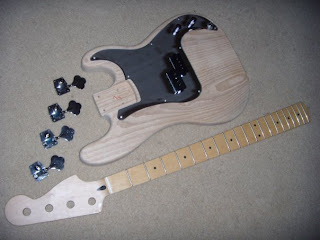 I can't believe I got almost all of these parts for free. Again, huge thanks to Wookie. The mirrored pre-wired Eden pickguard came by way of an ebay vendor in Hong Kong, and it doesn't quite cover the route in the body for the controls. It was $35, so not expecting much. The suspect here is the larger-than-standard route by the body manufacturer Mighty Mite - several people I've talked to report the same thing. The Mighty-Mite pickguards supposedly fit fine, but they didn't have a mirrored one. So I'm either shipping my Eden off to the boys at Pickguardian (www.pickguardian.com) and having them custom-cut a guard for me, or filling in the small area just above the output jack with s piece of scrap wood and Bondo, sanding it flat and painting over it. Jury's still out on that decision. What's more exciting is that i can actually drill the right holes for the bridge and neck because my wife got me a drill press for Christmas. No more shaky hand drill screwups like I had with the doomed Project Shredder. Did I mention how awesome my wife is?

Stay tuned, more updates to come on this project. Up the Irons!
Posted by Bryan at 2:00 PM